Isaac Wink is a member of the class of 2019. We caught up with Isaac about his life since graudation and how he's used his history education as a volunteer with the Jesuit Volunteer Corps working with asylum seekers in Texas.

What did you do after graduating from UChicago?

I studied immigration history with my undergraduate degree. When I left UChicago I knew that I wanted not just to study immigration as an academic, but to do work that impacted—even if only on the scale of individuals—current immigration policy.

I began working with the Jesuit Volunteer Corps in August 2019. It’s a one-year service program similar to AmeriCorps. I worked with asylum seekers at the YMCA International Services of Houston. Mostly I worked with people who were unrepresented in immigration court and who wanted to apply for asylum. I worked in some capacity with people from every continent except Australia and Antarctica. I helped them put their applications together. That involved working with asylum seekers to develop a personal declaration describing the persecution that they were fleeing and doing research on conditions in their home country. Those were the parts of the job where I felt that my history degree was most relevant, because they involved helping people tie their own personal narratives into the broader political situation going on in their country.

What type of immigration history did you study?

I wrote my history B.A. thesis on a border incident that took place in El Paso in 1948. I was interested in the role that border patrolmen have played as de facto immigration policy setters, particularly because the border was not nearly as militarized a zone 70 years ago as it is today. There was a lot less oversight. My assumption going in was that it would be important to look at how members of the Border Patrol viewed their jobs as a way of getting an accurate picture of what border policy looked like—not just in terms of how it was being legislated in Washington, DC—but how it was being carried out in practice and enforced.

I first learned about the 1948 El Paso incident by doing secondary research. There was a large gathering of Mexican men in Juarez just on the other side of the border who were hoping to be hired as braceros—bracero being the work authorization for Mexicans working in the United States during the 1940s and 1950s. The people who were waiting ended up going across the border illegally. Border Patrol agents on the other side arrested them and then paroled them to growers who were gathered in El Paso and who were hoping to recruit migrant labor.

I had so many questions about this incident: Was this a group of men who decided on their own to charge across the border? Were they invited in by the growers and by Border Patrol? What was going on with arresting people and then paroling them? I used this incident as a way of making a broader argument about how decisions made by very low-level agents matter a lot in terms of what was happening in migrants’ lives and in migration policy.

What kinds of sources did you use for your thesis?

I was awarded a Mann Travel Grant from the history department to travel to El Paso and do archival research, which was absolutely amazing. I did a lot with the newspaper records kept by the local public library and records of Bracero recruiting at the University of Texas at El Paso, but the main reason I wanted to go was the archives of the National Border Patrol Museum. They had a lot of really cool stuff that had been donated from Border Patrol sectors along the Texas border. I was able to access internal communications between Border Patrol agents and interviews with agents talking about their experiences and the work that they did.

Did working with asylum seekers in a direct capacity last year make you see your research in a different light?

One thing that I thought about while I was working was something that I heard from a graduate student instructor whose class I took at UChicago. He said that the act of migration is agency. The act of migration is history. I thought a lot about the people I worked with in that context. These are people who are engaging in an act of history: they’ve made a decision about the circumstances in the place that they came from and they’ve gone through a lot in order to get to my office.

Do you have words of advice for current history students about the wider world?

Think critically about the skills you’re developing as a history major. The advantage STEM majors have is that it’s a lot easier to take stock of your objective skills. They can say they know how to code in a specific programing language, for example. History majors definitely get a toolkit too. We learn to think in terms of narrative, to critically evaluate sources, to ask ourselves questions when we’re writing about what each source should do. I would encourage current students to think about what skills they’re getting, and if they aren’t quite sure, then to ask those questions while they’re still in college.

The second thing I would say is definitely go the thesis writing route. That experience was one of the most formative of my college years. I just loved my seminar, and I loved getting to watch the development of my classmates’ projects as well. 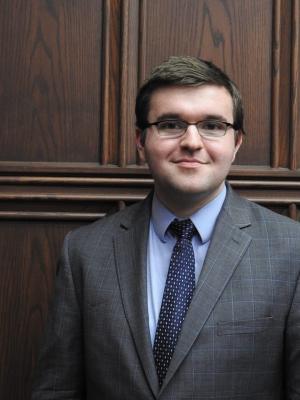