The University of Chicago has launched an endowment campaign to support the annual John Hope Franklin Lecture Series. The campaign builds upon the generous donation of Hanna Holborn Gray, former President of the University of Chicago (1978–1993) and Harry Pratt Judson Distinguished Service Professor Emeritus of History, to endow the John Hope Franklin lecture series.

Each year the Department of History invites leading scholars of slavery and its afterlives to deliver lectures on their research. In 2019 the inaugural lectures were given by Jennifer Morgan, Professor of History and Chair of the Department of Social and Cultural Analysis at New York University, and Vincent Brown, Charles Warren Professor of History and Professor of African and African American Studies at Harvard University. This year's lecture series will take place from October 27-29 and will feature noted historian and legal scholar Elizabeth K. Hinton of Yale University and Pulitzer Prize and Bancroft Prize-winning historian Heather Ann Thompson of the University of Michigan.

The John Hope Franklin Lecture Series honors the legacy of John Hope Franklin (1915–2009), a monumental scholar of US history, a pioneer in the field of African-American history, and a member of the University of Chicago faculty from 1964-82. Professor Franklin authored many groundbreaking books, including From Slavery to Freedom (1947), which became the longest continuously published survey text used in American history courses. In 1954, Thurgood Marshall asked Professor Franklin to serve as a legal historian focusing on the Reconstruction period in preparation for the Brown v. Board of Education Supreme Court case on segregation. He was also a civil rights advocate and participated in the 1965 march from Selma to Montgomery, Alabama. Professor Franklin was awarded the Presidential Medal of Freedom in 1995, the nation’s highest civilian honor, and in 1997, he was appointed to lead the Advisory Board to President Clinton’s Initiative on Race. 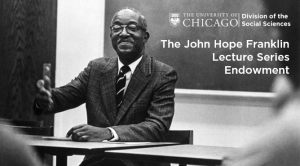