In a new installment on our series about alumni careers, we checked in with Rose Berman, AB'15. Berman is currently at Harvard Medical School and told us about her experiences over the phone. Her answers have been edited for length.

What did you do after graduation?

After graduation, I did a short internship over the summer at the National Institutes of Health and then taught English in the South of France at three elementary schools. When I came back, I did a post-bac premed program at Goucher College in Baltimore. I decided I didn’t want to go straight to med school—I still wanted to learn more about scientific research—so I did a two-year fellowship at the National Institutes of Health. There, I was studying liver cancer imaging and trying to develop a new liver cancer imaging agent. So I did a complete switch all the way from writing my BA thesis on the memory of World War I during World War II to liver cancer imaging!

How did you end up going from researching history to researching science? Were you interested in science in college?

I came to UChicago wanting to be a history professor. I had an awesome high school history teacher and I was very passionate about European History, especially World War I and II France and Germany. I wanted to do that and I didn’t like science because I never had a good science teacher.

In my first year of college, I started volunteering at Comer Children’s Hospital because I really just wanted to play with kids. That experience got me interested in medicine because I was able to shadow some doctors there and see the way that they were thinking about medicine in the ways that I thought about history. They were bringing in all of these different techniques: the lab tests, the CT scan, the patient history, the parents’ experience of the illness... And that was how I was doing history at the time. By my fourth year, I was thinking, “maybe I want to do medicine,” after having realized that I wanted to work directly with people.

What are your most vivid memories of studying history at UChicago?

One was Professor [Tara] Zahra’s Nazi Germany seminar, the colloquium which I took as a second year because I was going to be abroad my third year. Back then, they required third years to take a colloquium. So it was with mostly third years and I felt very challenged by the intensity of that class. It was three hours of a discussion class with ten people and I had never been in a class like that. I thought it was so cool because we delved deeply into primary sources and I felt really excited about history after that class. She actually became my BA advisor even though I didn’t end up doing a project in her area of specialty! I was just very inspired by her as a professor and writer.

In fourth year, I got to do a reading and research class with Professor [Leora] Auslander. That was so fun; I really enjoyed talking to her. We would meet once a week and decide on what book I was going to read for the next week and then we would discuss the book. I got to come up with an idea for my final essay. Those were two of my favorite experiences.

I also loved writing my BA. Because my whole goal was to be a history professor, I was excited to get to write that kind of thing because I was like “wow, this is how my life is going to be!”

How do you use your history degree in graduate school? How did it play into your application process?

It helped a lot, actually. They really value— not just Harvard, but all medical schools— people with different backgrounds, especially people in the humanities. On Wednesdays we have "Practice of Medicine" where we actually see patients, learn the physical exam, and study ethics and ways to talk to patients who have gone through trauma. I really think coming from a humanities background where I studied people’s feelings, emotions, and desires helped me understand that side of medicine. Because that side of medicine is starting to become more valued, it’s not just about knowing the facts.

In terms of the application process, I think I was able to bring in something new. They would always ask “Why did you switch from history to medicine?” It was great because the question is usually, “Why do you want to be a doctor?” which is really hard to answer, actually, since everyone has the same answer. But they never asked me that. They always asked me this question that was more nuanced and I got to talk about my transition.

I also discovered this field after I graduated called paleopathology; it’s the study of ancient disease. In the past it was mainly through studying bones, but now they’re starting to get into the DNA of ancient pathogens and also ancient proteins that you can isolate from bones.

I’ve always been fascinated by this idea of how you can use science to answer historical questions. I really want to get into that and that’s something that’s being studied at Harvard, which is why I chose to come here. I really want to use history in some way and I like the idea of studying the past, figuring out what we can learn about the spread of ancient pathogens, then using that in the present.

Do you have any advice to provide to current history students?

Definitely write the BA thesis. Even if it seems like it makes your life harder, I think it’s a time of growth. Even if you’re not going to be a historian (I’m the example, I’m not going to be a historian!) I still found a great amount of pleasure and learning coming out of that experience. Also, don’t be limited by your history degree, because I wasn’t! It opened up new avenues for me, by combining fields and being interdisciplinary.

To learn about other alumni and the paths they've taken since graduation, check out our feature on Sonia Gaur, who is at NBC Universal. 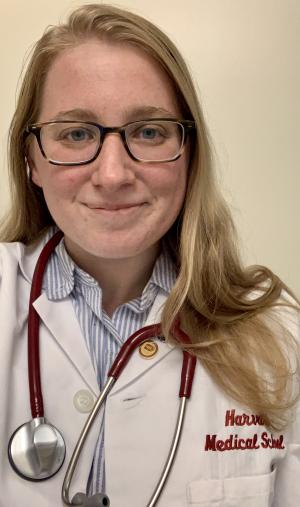