We celebrated the accomplishments of the Class of 2017 on June 9th. Surrounded by proud families, Matt Briones, faculty chair of the undergraduate program, thanked the students for all their hard work, good humor, and inquisitiveness. The winners of BA theses prizes were announced to applause.

Matt praised the editors of the Chicago Journal of History on a great year. Guided by Editor in Chief Hansong Li, the editors of the journal were awarded the university's Unsung Hero Award for "positively influenced a program or organization from behind the scenes with a positive attitude, a willingness to help in whatever capacity necessary, and a commitment to excellence." In 2016-17 the editors published two volumes of the journal with contributors from universities across the nation and England, they organized three panels of distinguished scholars, and hosted numerous talks. 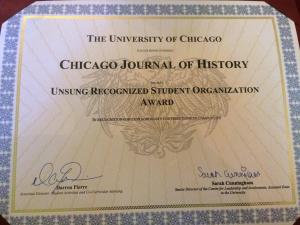 Our newest alumni will be doing remarkable work; here is a sampling: