A Desire for History: Students Build a Queer Archive

An ambitious research project, "Closeted/Out in the Quadrangles," aims to make visible the contribution of LGBTQ people to the intellectual life of the University of Chicago. The project is sponsored by the Center for the Study of Gender and Sexuality and organized by Monica L. Mercado, PhD'14 (history), and Lauren Stokes, PhD candidate in history. It will culminate in an exhibition curated by Stokes at the Special Collections Research Center this spring (March 30–June 15, 2015). The exhibition will trace LGBTQ life from the early twentieth century to the present, with a strong focus on the period from the Stonewall riot in 1969 through AIDS activism in the 1980s and 1990s.

Oral histories from generations of alumni, faculty, and staff are a key to the project's success. Since the late 1960s social historians who study women, racial minorities, or sexual minorities have used oral histories to make up for the limitations of materials available in archives. Archival sources narrate how authorities in the academy, medicine, and government defined and sought to control marginalized groups but are almost silent on how women or minorities defined themselves and organized their lives.

As George Chauncey, a History faculty member (1991–2006) and author of Gay New York: Gender, Urban Culture, and the Making of the Gay Male World, 1890–1940, observed: "the methodological problems facing the historian of homosexuality appear, at first glace, to be unusually daunting." Faced with uncataloged source materials and the reticence of many members of the gay community to leave historic traces, Chauncey said "it became clear that oral histories would be the single most important source of evidence concerning the internal workings of the gay world."

Mercado and Stokes found similar gaps in the official history of the university. The university's archive was rich in academic studies of the city's marginalized populations, but poor in materials created by LGBTQ individuals and groups associated with the university. Chauncey and Chad Heap, PhD'00 (history), used the academic sources to document the complicated history of the Chicago school of sociology in the 2000 Special Collections exhibition, "Homosexuality in the City: A Century of Research at the University of Chicago." But organizers of a 2012 exhibit, "We Are Chicago: Student Life in the Collections of the University of Chicago’s Archive," could find only basic items to illustrate LGBTQ student life. The time was right to build a queer archive based on oral histories.

Over the past four years, undergraduate interns trained in oral history methods have fanned out across the country to listen to and record alumni stories. Alumni were eager to give back. They generously donated letters, documents, photographs, posters, and ephemera, saved with an understanding of their future historic significance. These materials and over ninety oral histories of LGBTQ alumni, faculty, and staff will be deposited in the university’s archive this spring.

"Closeted/Out in the Quadrangles" is one of eight research projects sponsored by the Center for the Study of Gender and Sexuality. Established in 1996, the center promotes critical thinking across academic disciplines. It offers an undergraduate major and minor and a graduate certificate. Each year, the center offers teaching opportunities for graduate students and awards eight doctoral fellowships, including three to History students in 2014–2015: Emily Lord Fransee, Korey Garibaldi, and Sarah Weicksel. 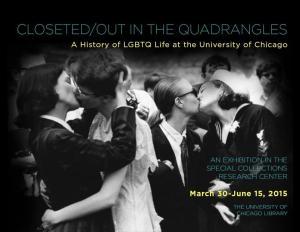