When Jahne Brown entered Student Government as a first year, she was not expecting to run for president. Yet, last spring, she did – and won, becoming the first female and first black female student body president at the University of Chicago.

Brown, who grew up in Louisville, KY, was drawn to Chicago for its vibrant history and diversity. Since then, she has taken various classes related to conflict, nationality, and social movements that made her a more “historical thinker.” Being a history major, she says, has made her more aware of racial issues and the University’s role in the Hyde Park community, ultimately inspiring her to pursue a leadership role in Student Government.

Brown says that she is looking forward to her senior year and to her time as student body president. She is especially excited to make better use of the Student Government’s discretionary funds, with the hope that more of its budget can go towards helping community members in need. As for her research track, Brown intends to further explore issues of race, class, and activism. She is currently interested in writing a senior thesis about black members of the communist movement in Alabama. 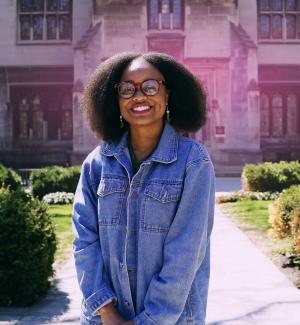