Jessa Dahl is a PhD candidate in Japanese history. Originally from Minnesota, Dahl attended Knox College in Galesburg, Illinois as an undergraduate. This year, she returned to her alma mater as a visiting professor. We talked with Dahl about her route back to Knox, her research, and her pedagogical philosophy.

How did it work out for you to return to your college?

It was luck. Knox had a position in the history department that they needed to fill quickly and they wanted someone whose field was outside of the US or Europe. I reconnected with the chair of the department, Catherine Denial, at an American Historical Association conference a few years ago to talk about pedagogy and teaching. I think a lot of people would tell you I’ve been a disciple of her approach to teaching history. It’s founded on compassion for students and good reading of primary sources, which are easy things to endorse. The position seemed like a great opportunity, so I applied for it. I’ve always wanted to go back to Knox. I’ve even gotten a couple letters from my old professors saying “I’m so excited to welcome you as a peer!” My office is my old advisor’s office!

It’s a small, tight-knit community, only about 1,000 students. There’s a strong sense of communal responsibility, which has been clear in the administration, faculty, and students’ response to the challenges of this year.

What are you teaching there?

I’ve had a lot of freedom in developing the courses. This fall I’m teaching Introduction to Japanese and Korean Civilization. I took that course thirteen years ago and I reconstructed it from my old textbooks, which still have my college notes in them! For the rest of the year I am going to be teaching a mixture of survey, mid-level courses, and one advanced course in the spring. I’m also finishing my dissertation, so I’m hoping it’s going to be a dry run for teaching and writing at the same time.

How are you planning to modify the introductory course from when you took it?

The main shift has been building the class to be online. I’m only having students meet in a synchronous session once a week to talk about documents and do a close reading because it’s impossible to do that any other way. My lectures are pre-recorded, and I’ve created a number of additional activities to help students engage with the reading outside of synchronous class. Some of my students are on campus, some aren’t. Flexibility is key.

It has been a lot of fun to go back and re-explore these texts. There are limited numbers of primary source collections that are translated into English from Japanese and Korean, so I used the same ones at UChicago as a teaching assistant. One thing that my original Knox course did that was fascinating to me as a student, and that I have been able to replicate, is reading The Tale of Genji, abridged. It’s the oldest novel ever written, and unlike many of the other texts we’ve read for this class, it’s by a woman and it’s all about the political consequences of romantic affairs. It opened my eyes to how literature can give you insight into a different world, seeing what interpersonal relationships looked like. There’s all this poetry in The Tale of Genji. For a man to be able to come up with a beautiful poem about a woman’s beauty off the cuff was really seductive. Seeing how people are connected to the main character is a way of exploring how they are connected to each other. It’s such a rich exploration of what it was to live as a very elite person in 11th century Japan.

Which courses have you taught at the University of Chicago?

I did the Von Holst Fellowship, for which I designed my own course about colonial power in East Asia. I was a teaching assistant for Introduction to Japanese History, Gender and World Civilization, and Colonizations II. I was also a preceptor for two years, so I taught the undergraduate historical methods and historiography courses and oversaw BA theses.

How did those experiences prepare you for your job now?

The Von Holst—the experience of creating my own course—was especially useful. I’ve realized that I can lay a foundation, but whatever happens during the term is going to require adjustment. You can never predict what a class is going to seize on, and sometimes it does not align at all with your lesson plan, but I think it’s important to let discussions build on what the students are actually interested in. When students’ questions don’t fit into the lesson plan, it’s the lesson plan that should be changed.

Could you tell me a bit more about your pedagogical philosophy?

My approach to survey classes isn’t to make sure students are memorizing years and dates and dynastic charts. It’s more important that they find two or three important ideas within the survey that they think about deeply, like: What is the relationship between governance and religion? Or: Is there something that we can call Japanese tradition that runs throughout its history, or is it more complicated than that?

One approach to reading that I stole right from Catherine Denial is called the SOCC methodology: you teach students to source, observe, contextualize and corroborate documents. One of my first document reading assignments is to have students read a meme as if they are historians in the future. I always get such a groan from them, but it ends up really fun!

What is your research about?

I look at the treaty port of Nagasaki in Japan in the mid-19th century. Treaty ports were settlements in East Asia that were open to European and American trade through a series of unequal treaties, and are often categorized as “semi-colonial,” a mixture of treaty-enforced colonial hierarchies and local administrative control. My research tries to get at the meaning of semi-colonial space. Can something be semi-colonial? What did that mean for the transnational communities that made up the city? Nagasaki is interesting because, unlike Shanghai, European and American trading and political residents didn’t have a lot of power, and Japanese officials and residents did have a lot of power, even though the system wasn’t built to give it to them. Through Nagasaki, I can explore the way local communities create spaces of opportunity despite oppressive regional and international systems.

I actually spent a year in Nagasaki after graduating from Knox. I got a research Fulbright to go to Japan, but I had no familiarity with Nagasaki at all. I was terrified, but it was awesome. I made a connection in that community that has lasted ten years and counting. As someone who did not even know that academia was a profession you could aspire to before doing to college, I’ve done a lot of things that I wouldn’t have been able to do anywhere else.

This interview has been edited for brevity and clarity. 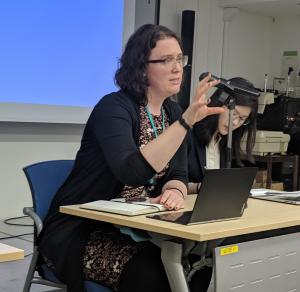 Jessa Dahl presenting at a conference in Tokyo, 2019.