Spotlight from the Class of 2020: Lena Breda

In the aftermath of this month's convocation, dozens of recent history undergraduates have begun new chapters as alumni. Among them is Lena Breda, who will be participating in the Fulbright U.S. Student Program in Italy. Breda told us about her experiences studying history at UChicago, writing her thesis (which won the 2020 Karafiol Prize), and graduating during the global pandemic. Her answers have been edited for brevity.

What is your most vivid memory of studying history at UChicago?

I began studying history in the summer of my first year. As a research assistant, I read an enormous range of newspapers that covered candy poisoning and food adulteration in nineteenth-century New York. I spent countless hours in Cafe 53, Fabiana’s (Rest In Peace), and my overpriced and un-airconditioned sublet flipping through digital copies of newspapers. Despite the humidity, I remember this period so fondly because it was one of the few opportunities in undergrad where I was able to pursue my own curiosity without an agenda. I hopped around time periods, locations, principal characters. I got to know the various officers involved in New York’s food adulteration patrol, the neighborhoods, and the questions at play in the society. Even though my current research is quite far from this subject, I value the time I was able to spend immersing myself in research without a nagging worry of productivity or careerism.

What did you write your BA thesis about? What was that process like?

Amusingly enough, my B.A. thesis ended up being the inverted version of my original idea. While it was initially about the role of bread in the 1590 famine, I ended up writing my thesis on the impact of the 1590 famine on bread (well, on food more generally). My thesis argued that while Medieval beliefs about food (dietetics) thrived in a stable social and political hierarchy, the fortitude of these beliefs was shaken as the series of famines in the sixteenth century undermined these structures. In the long tradition of micro-history, my thesis revolves around the peculiar case of Ruinetto, a Bolognese peasant who is hauled in for questioning by city officials after showing his neighbors a loaf of white bread he brought from Rome. By understanding the context surrounding this seemingly bizarre case, we are able to understand its significance to Bolognese society and how it represents many of the socioeconomic trends that inspired the shift to Early Modern dietetics at the beginning of the seventeenth century.

My B.A. thesis was about two years in the making. I began as a research assistant studying food adulteration which gradually transformed into a project on bread adulteration, and then eventually just a project on bread. I spent my second-year summer in Italy, familiarizing myself with the historiography on Early Modern bread and eating embarrassing quantities of gelato and cream croissants. My third-year summer, I plunged into the world of archival research at the Florentine State Archives. The fall of my fourth year, I expanded on this research (or in a sense specialized) at the Bolognese State Archive while studying abroad at the University of Bologna.

What will you be researching in Italy for your Fulbright?

I’ll be expanding a footnote of my B.A. thesis into a larger project. I will research how sixteenth-century Italian perspectives on the Eucharist transformed during famines when there was a shortage of wheat: a critical ingredient to one of the most important religious objects in Early Modern Europe. I will base myself in Bologna, but I will likely spend some time in Rome to examine correspondence to the Papal State about wheat shortages in Italy more broadly.

What are your interests outside of being a history student?

Outside of history, I love filling my now copious free time with a variety of hobbies. I love to write: poetry, personal essays, even comics! I’ve been getting very into film analysis (inspired by some of the incredible faculty in the Italian and History Department) and hope to try to publish something in the next year. I also love cooking, dog-sitting animals with Rover, and voyeuristically searching through Yelp for restaurants and bakeries.

What are you looking forward to in the upcoming year?

Like many of my peers, I feel a great deal of uncertainty for the future. Where will I be in the spring? What will happen this fall? I also hold a degree of sadness in returning home after the grand “triumph” of college graduation, as if I’m reverting back to my unibrowed, insecurity-filled high-school self. We celebrate our grand accomplishments of college, but these victory laps leave a strange taste in our mouths when they end at the very place we began from.

I look forward to Oregon summers which are always abundant in wild blackberries and void of mosquitos. I look forward to relearning the streets of my childhood city which I once could maneuver blindfolded. I look forward to an upcoming “meatball-making” competition between me and my mother which I will most certainly lose. It’s probably for the best to lean into small joys, pursue curiosity, and allow the ‘big things’ to work themselves out at this strange juncture without my own hand-wringing. 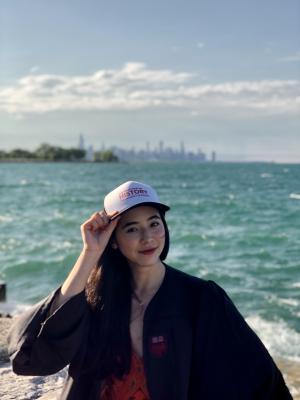