This article is adapted from a feature by the Social Sciences Division.

Early next month, UChicago’s history department is hosting the first in an exciting new lecture series reflecting the role the university has played in shaping the field of African American Studies.

Slavery and Its Afterlives: The John Hope Franklin Lectures, is a three day event (October 2-4) to honor the legacy of its namesake, John Hope Franklin, a distinguished historian and former UChicago professor whose work transformed our understanding of the African-American past. Franklin joined UChicago’s Department of History in 1964, and he retired in 1982 as the John Matthews Manly Distinguished Service Professor.

Franklin was one of America's leading historians. He was the first African-American to serve as president of both the American Historical Association (AHA) and the Organization of American Historians (OAH), and was author the groundbreaking book From Slavery to Freedom: A History of Negro Americans, which became the longest continuously published survey text used in American history courses.

This lecture series will shine a light on Franklin’s work and the work of other scholars on the history of slavery and its legacies, the African diaspora, and topics related to race, slavery, and freedom throughout the world. The three day series, which is open to everyone, will include lectures and panel discussion with several prominent scholars:

"Madwomen on the Slave Ship, Reproduction and Racial Capitalism" (October 2 - SSRB 122 - 4:30 PM). Jennifer Morgan, professor of history and chair of the department of social and cultural analysis at New York University (NYU), will give the first lecture based on her current research on the intersections of gender and race in in the Black Atlantic world.

"Tacky’s Revolt: The Story of an Atlantic Slave War” (October 3 - SSRB 122 - 4:30 PM). Vincent Brown, the Charles Warren Professor of History and Professor of African and African American Studies at Harvard, will present a lecture on his latest book, a gripping account of the largest slave revolt in the eighteenth-century British Atlantic world, which reshaped ideas of race and popular belonging.

"Slavery and its Afterlives” (October 4 - 10 AM - Classics 110): This roundtable discussion will be moderated by Destin Jenkins, UChicago’s Neubauer family assistant professor of history. The panelists will include Brown, Morgan, and four UChicago scholars:

Please contact the Department of History for more information or to request accommodation by reaching out to David Goodwine at dgoodwine(at)uchicago.edu.

The lecture series is sponsored by the Department of History, the Center for the Study of Race, Politics, and Culture, the Social Sciences Division, and the Neubauer Family Assistant Professors Program. 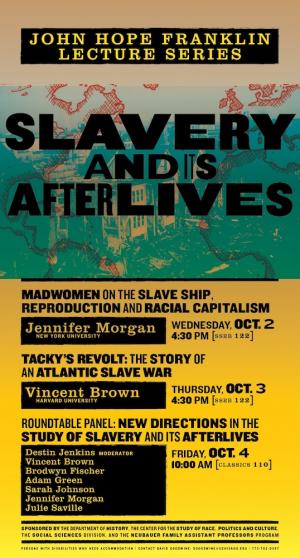