This autumn, students in HIST 25402, or "Disastrous Histories: Scientific and Social Understandings of Modern Disasters," are tackling timely questions about "natural" disasters and how we understand them as historians. "Disastrous Histories" is taught by Alex Jania, a Von Holst Prize Lecturer and PhD Candidate in the History Department. The course is open to all undergraduate students with no prerequisites. We corresponded with Jania about the course and the field of disaster studies.

What exactly is Disaster History? Why is it relevant to us?

Disaster History is part of the much larger interdisciplinary field of disaster studies, which encompasses researchers like anthropologists trying to understand how people of different cultures interpret disasters to practitioners, like emergency managers, who deal with disaster response, mitigation, and recovery on the ground. What historians who do Disaster History can bring to this field reflects the fundamentals of our discipline: the ability to grapple with continuity and change over time. In the popular imagination disasters are seen as events that are sudden, but ultimately temporary breaks from the “normal” or “everyday.” Disaster historians instead can show how each disaster event has a longer history that allow a combination of existing hazards and human choices to lead to the disruptive disaster event. A wonderful example of this is Andy Horowitz’s recent book on Hurricane Katrina, where he argues that “disasters are less discrete events than they are contingent processes.” By analyzing Hurricane Katrina as a (yet unfinished) process from 1915 to 2015, Horowitz shows that Katrina has a long history that stretches beyond 2005. This leads us to ask, what is the disaster? Is it the events of late August 2005 on the Gulf Coast or can the process that created the vulnerabilities of New Orleans and of the New Orleanians unable to evacuate be called a disaster? If a society considers the event a “disaster,” but the process leading to it “normal,” that, in turn, says a lot about the political work the concept of disaster does in any moment.

When I began developing this course in late 2019, I believed a class on disaster history that covered the fundamental dynamics of disaster in modern times would be relevant for students who live in a world where Climate Change exacerbates and creates more disasters every year. This motivation gained a new sense of urgency when the COVID-19 Pandemic sent most of the world into crisis and lockdown in early 2020. Disaster history is, perhaps unfortunately, more relevant than ever as we ask ourselves questions “how could this happen,” and “how could it have gotten so bad?” These are exactly the type of questions disaster historians ask and try to answer.

What does the course cover?

The main narrative arc of the course charts how the categories of “natural” and “man-made” disaster were constructed as religious explanations for disaster events have waned in the 18th century and how those categories have become complicated over time as we enter the era of Climate Change during the early 21st century. This means we start with a discussion of the 1755 Lisbon Earthquake, which some consider the first “modern” disaster because it destabilized religious understandings of disasters in Europe. The course ends by venturing into the future of climate change and what it might mean for historical thinking. Along the way the course covers key case studies of disaster from across the globe in a roughly chronological order. Among the themes discussed are urban reconstruction, whether post-disaster society is pro-social or anti-social, and how the development of energy infrastructure can create displacement. Some of the events covered include the Great Chicago Fire of 1871, the 1918 Influenza Pandemic, and the 2005 Amagasaki Train Derailment in Japan.

What was most challenging about developing this course?

The most challenging part of developing this course, which has also been the most fun, is that it forces me to get out of my subject, region, and period of specialization. I am a historian of Japanese post-disaster memorialization in the 20th and 21st century, and I mostly look at the response to earthquake and tsunami related disasters. To prepare for the course, I have read up on the birth of modern seismology during the Enlightenment in Europe, fire disasters in 19th century cities, and the Bhopal gas disaster in 1980s India, to name a few of subjects we’ll cover. It has meant a lot of work to be able to talk about disasters in areas where I have less expertise or knowledge. However, it has also meant that I get to recapture the joy of learning about issues, times, and places that are unfamiliar to me.

Why do you think it’s important to study disasters through a historical lens? How does disaster history relate to environmental justice movement(s) or to other political struggles for a healthier/more just planet?

During or after a disaster, oftentimes politicians and other figures in power characterize the disaster with terms/phrases like “unprecedented,” “once in a lifetime,” “unforeseeable,” “natural,” or “an act of god.” While every disaster has its own specific dynamics, using history to study disasters disabuses us of the notion that disasters occur out of the blue, are unpredictable, and are purely accidents of nature. By uncovering the history of human choices, social processes, and environmental hazards that led up to a given disaster, we can understand how that disaster was created. The realization that there is no such thing as a “natural” disaster is both politically infuriating and empowering at the same time. To acknowledge that disasters are the result of historically contingent human choices, systems, and structures indicts the status quo that created the conditions of disaster, but also reveals that we have the potential to change those conditions.

Given that disaster historians, and scholars that study disasters generally, work on uncovering and understanding the conditions that lead to disaster, there is strong advocacy for environmental justice from within the discipline. This makes sense given that disasters often spark or highlight struggles for environmental justice. Whether it’s a dramatic disaster event like the burning of the Cuyahoga River in 1969, or a slow-moving disaster like the methylmercury poisoning of citizens of Minamata by the nearby Chisso chemical factory in the 1950s, disasters have historically catalyzed social movements aimed at cleaning up the environment and holding those that cause disaster accountable. The threat of future disasters can also be central to environmental justice causes. For example, in addition to issues of sovereignty and the use of reservation lands, protesters of the Dakota Access Pipeline at Standing Rock cited the risk of an oil spill that could threaten the water supply of the Standing Rock Sioux as a reason to oppose the construction of the pipeline. If anyone is interested in the intersection of disaster research and environmental justice, I would highly recommend Samantha Montano’s recent book Disasterology, in which she articulates a vision for “Disaster Justice.”

What is your favorite disaster movie?

This is a great question! There are so many that I love, even though from a serious researchers’ perspective many are deeply silly. Disaster movies are nonetheless important because they shape popular understandings of disaster events.

My most recent favorite is the 2016 anime movie Your Name (Kimi no na wa) by Makoto Shinkai, which involves a comet impact, gender swapping, and high school romance. As a scholar I see the movie as a fascinating response to the 2011 triple disaster (known as 3.11) in Japan, in which Shinkai offers a critique of local bureaucracy and finds salvation in Shinto practice. As an anime fan the film is drawn so beautifully and the soundtrack by Radwimps remains one of my go-to karaoke picks.

What’s the one primary or secondary source you’re most excited to teach?

The piece I am most excited to teach is the cli-fi (or climate-fiction) novel American War by Omar El Akkad. The novel imagines the outbreak of a Second American Civil War in the mid 21st century with the central issue being the outlawing of fossil fuels in the North in response to climate change and the continued use of oil in the new rebel south. The story is told largely through the life of a woman of color from the South and explores the long effects of war, displacement, petro-masculinity, and compound disaster events. The novel is also punctuated by fictious pieces of future histories on the Second American Civil War, like a history syllabus of the war from 2100, an excerpt of a book written by a future historian, and oral histories from combatants in the war.

We will read the novel in the last week of class as a “history of future disaster.” It will allow us to explore important topics like whether war can be considered a disaster, or the long-term effects compound disasters can have over an individual’s lifetime. The incorporation of fictitious future histories in the novel will also let us discuss issues like historiography and how we can use the historical imagination to grapple with the possible futures of climate change.

If you are interested in learning more about disaster studies, check out these texts recommended by Alex Jania. 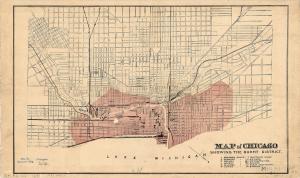 Map of Chicago displaying the burnt area of the city (in red) following the Great Chicago Fire of October 8-10, 1871. The 150th Anniversary of the Chicago Fire was commemorated this month.