The cover illustration of I Speak of the City is a detail of a 1947–49 self-portrait by the artist-architect Juan O'Gorman. O'Gorman holds a sixteenth-century map of the Aztec city of Tenochtitlan in front of the skyline of Mexico City, the Spanish city built over Tenochtitlan's ruins. New construction and skyscrapers (the International Building advertises offices for rent) dominate the landscape. In the pale sky of midday, two allegorical female figures, one white, one brown, float above the twin volcanoes that form the eastern ridge of the Valley of Mexico. The figures unfurl the Mexican tricolor emblazoned with the words, "Viva Mexico." A curled scroll near the bottom edge pinpoints the image's political and historical geography: "here is shown the heart of Mexico City exactly as seen from atop the Monument of the Revolution, looking eastward."

O'Gorman's painting, like the city itself, is a complex set of layers—of image and words, past and present, architecture and landscape, European and Indian, male and female, cartography and allegory. Tenorio employs equally complex narrative layers in I Speak of the City to capture the meaning of Mexico City on the cusp of modernity. The book spans the "decisive decades" between 1880 and 1930 when Mexico City (together with Berlin, Chicago, and Paris) emerged as a modern city. Each of the book's six parts explores one urban facet in pointillist detail: civic centennial celebrations; the city as muse for revolutionary artists; the city as antithesis of the "real," exotic Mexico; an orientalist craze for India and Japan; urban scientists; and the language of a city now past.

I Speak of the City is one of a growing number of books about Mexico's centrality to the global flow of ideas. "Mexico City has been so much a part of the making of the modern that examining it is but another way to inhabit what is known as the modern world," Tenorio writes in the introduction. He turned to the essay, a conceptually playful genre, to convey this immersive quality. A favorite of modern urban writers, the essay form stylistically matched Tenorio's subject and permitted a much freer analysis of Mexico City's experimental and intellectual culture than a conventional historical monograph would have. I Speak of the City is both an empirical investigation and a prose poem, and a remarkable achievement.

In accepting the award, Tenorio thanked the Press for understanding "the idiosyncratic nature of my work" and how "my crazy intuitions could be considered knowledge."

The Laing Prize honors a University of Chicago faculty member who writes, edits, or translates a book that brings the most distinction to the Press. Garrett P. Kiely, Press director, explained that Chicago is the only academic press to present such an award. It is named for Gordon Jennings Laing, who was the general editor of the Press (1909–1921, 1923–1940). Laing also had a long academic career in the university's Department of Latin and helped found The Classical Journal and Classical Philology. 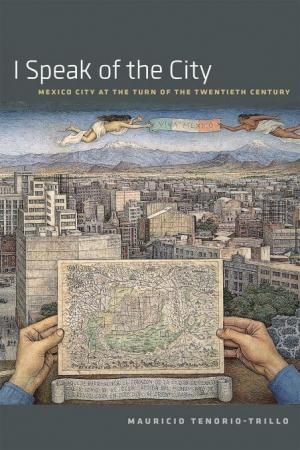 I Speak of the City by Mauricio Tenorio-Trillo, published 2012