Morris Moishe Postone, AB’63, AM’67, the Thomas E. Donnelley Professor in the College and the Department of History at the University of Chicago, died on March 19, 2018. He was an intellectual historian of modern Europe with specific interests in theories of modernity and anti-Semitism. He received fellowships from the National Endowment for the Humanities, the American Academy in Berlin, the International Research Center for Cultural Studies, Vienna, and the Institute for Human Sciences, Vienna.

Emilio Kourí, chair of the Department of History, said "Moishe Postone was an internationally recognized historian and practitioner of critical theory; his reinterpretations of Marx's thinking—both in his published work and in his graduate colloquia—were insightful and influential. A gifted teacher, he trained generations of scholars in European intellectual history and for more nearly three decades chaired the Core sequence on Self, Culture, and Society." 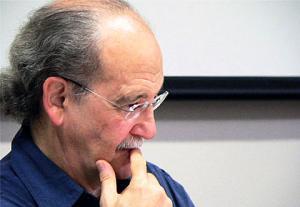 Postone was born on April 17, 1942, in Edmonton, Alberta, Canada, to Rabbi Abraham Postone and Evelyn (née Haft) Postone. He graduated from the University of Chicago with a bachelor's degree in biochemistry and a master's degree in history. He received his doctorate in 1983 from the Goethe-Universität, where he study with Iring Fetscher, a political scientist associated with the so-called “Frankfurt School” of social theory.

Postone returned to the University of Chicago in 1987, first as a William Rainey Harper Instructor in the College's core curriculum, and he remained dedicated to the foundational instruction of undergraduates throughout his career. He was awarded the Llewellyn John and Harriet Manchester Quantrell Award for Excellence in Undergraduate Teaching in 1999, and his graduate students recommended him for the Faculty Award for Excellence in Graduate Teaching and Mentoring, which he received in 2009. As testament to the breath of his knowledge, over sixty students of anthropology, history, political science, sociology, and other disciplines asked Postone to be a member of their dissertation committees.

The publication of Postone's first book on Marx in 1993 coincided with the collapse of communism in Eastern Europe and Russia and the consolidation of neoliberal capitalism in the West. Time, Labor, and Social Domination: A Reinterpretation of Marx’s Critical Theory (Cambridge) argued against the dismissal of Marx as irrelevant to the current historical moment and offered a fresh analysis of Marx's mature social theory. Widely praised and widely translated, this complex work was, nonetheless, considered a preliminary investigation by Postone. He spent the next twenty-five years exploring how Marx provides, in Postone's own words, "a powerful critical social theory of the contemporary world."

The University of Chicago's prominence in the study of social theory and the political economy of modern states owes much to Postone's leadership.  He was the codirector of the Social Theory Workshop, the codirector of the Chicago Center for Contemporary Theory, an organizer of over two dozen conferences, and a founding co-editor of the journal, Critical Historical Studies.

Postone's other major interest was anti-Semitism in the twentieth century. His father escaped Lithuania in 1939, but many members of his father's family perished in the Holocaust. With Eric Santner, the Philip and Ida Romberg Distinguished Service Professor in Modern Germanic Studies, he edited Catastrophe and Meaning: The Holocaust and the Twentieth Century (Chicago, 2003).

At the time of his death Postone was working on two book manuscripts: “Capital: A Reading” and “Critical Social Theory and Contemporary Historical Transformations.”

He is survived by his wife, Christine Achinger; son, Benjamin, AM’17; and siblings, Norman (Lisa Fruchtman) and Marilyn Moss.

A memorial service for Moishe Postone will be held on 22 October 2018 at 4.00 PM in Rockefeller Chapel. A reception will follow.