A Papal Election Here on Campus

Learning about power politics in the world behind Machiavelli’s Prince.

Ada Palmer has devised a live-action role-playing simulation of a papal election circa 1490 for her course on the Italian Renaissance. Students negotiate, make alliances, trade money and titles, commission art and literature to win the love of the public, and compete to elect a pope, whose influence and military strength then determines the shape of a war, which occurs on the last day of the simulation.

Europe in 1490 was a powder-keg, the Italian peninsula a mass of constantly-warring fragile city-states, and the larger kingdoms outside it hungry to expand their territories through war. The Renaissance papacy was much more than a spiritual center, and students experience first-hand how their alliances tangle and ripple outward, drawing them into unintended rivalries, confrontations, and very bloody consequences.

There are parallels between this process and modern politics, of course, especially how disparate interest groups ally for mutual gain and find themselves entangled thereafter. The simulation helps students understand how the concentration of wealth and power in the hands of a few families combined with period motives, such as anxiety about heresy or obsession with noble birth, to make Europe ripe to explode into the tangled pan-European conflict that inspired Machiavelli’s pioneering observations in The Prince.

Each of the forty-five students plays a historical figure. They portray influential cardinals at the center of politics and powerful families; less powerful cardinals, leveraging their votes to gain wealth or power, forward doctrinal agendas, or protect their homelands from the threat of war; world monarchs, such as King Henry VII or Queen Isabella; and papal functionaries and secretaries who may exert surprising influence by trading back-corner secrets. The simulated conclave takes place in Rockefeller Memorial Chapel.

Each student receives an extensive character dossier containing a unique set of resources, an individual character sheet, and a list of goals. Students make their own decisions, so the outcome of the election may not match real history. In fact, the many consequences of students’ actions are different in each simulation, and different kingdoms, families, or cities rise or burn.

One former participant in the simulation, Brendan Small, recalls his experience: “The genius of the game is its open-endedness. The game is competitive by nature, but there are enough variables to play with and decisions to be made to give everyone a unique narrative. I played one of the youngest characters, the freshly-appointed teenaged Cardinal Giovanni de’ Medici, son of Lorenzo Il Magnifico. Despite my immense wealth and privilege, I lacked noble birth, so I was treated with scorn and had to defer to many of the other cardinals. I was nervous about the volatile and erratic behavior of some of my allies, but I needed the help of powerful and influential cardinals to protect the Medici family and Florence from civil war or invasion. It was difficult to decide who to trust, how to best utilize resources, and how to respond to the machinations of the other players. I recall being so immersed in Giovanni’s world that receiving a moving letter about my father Lorenzo nearly brought me to tears.”

The final war phase forces the characters to answer for their decisions. As Patrick O’Connor observed, “I thought since I was the King of France I could just ignore what was going on in Rome, but the pope controls everything I want: my claim to Milan, the throne of Naples, my marriage alliances, everything!”

As a finale, the class reads The Prince, discussing how different the seminal text feels now that distant historical triumphs, enmities, loyalties, and bitter defeats have become real. One of this year’s participants, Ben Guthrie, reflected: “I had earned most everything I wanted in this election, especially in crushing my rival, but I was very unhappy that self-serving scheming won the day. My biggest lesson was that, when everyone around me was fighting for their own safety and self-interest, I had to do the same for myself and thus perpetuate the cycle. There was very little a good man could have done in this election, other than winning concessions for just a few interests, and even that would require working with unsavory characters. At the end, I felt like we were all collectively guilty.”

Another of this year’s participants, Leana Aparicio, summarized her experiences: “I have for a long time loved the Renaissance period—the excitement, complexity, and almost incredible instability of its politics and history. However, when forced to experience [the period] myself, I began to lament; playing one of the few morally upstanding characters definitely reinforced this feeling. I also now have greater disillusionment with elections in general. While the structure of this one may be different from modern elections, it emulated the sentiments that nobody seems to really get what they want. It also clearly served people best to abandon their moral principles sometimes and take preexisting loyalties lightly. I’m even more impressed than previously with successful Renaissance figures or states; with so many impediments, and when the whims or agendas of powerful individuals had so much effect, it is impressive that they accomplished anything significant or lasting.”

One of the questions we ask of history, and of our present, is how much individuals can make a difference. Do people determine the course of events, or are we locked in by structures of wealth and power? The papal election simulation helps students see how both these models can be simultaneously true: political, social, and economic networks can guarantee some kind of crisis, and yet individual actions do shape those forces, resulting in the particular crisis that comes. Having a chance to personally take part in shaping such a crisis makes it easier to understand the dynamism of the three-dimensional political world of a past era, and our own.

Special thanks to Elizabeth Davenport, dean of the chapel, and Matthew Dean, direct of chapel operations, for opening the doors of the Rockefeller to the class. 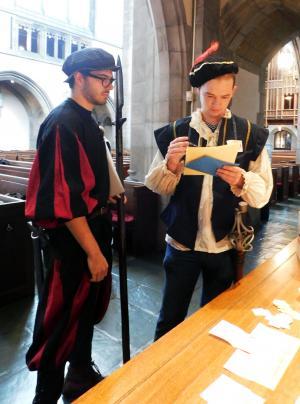 Guard & Member of the Cybo Family 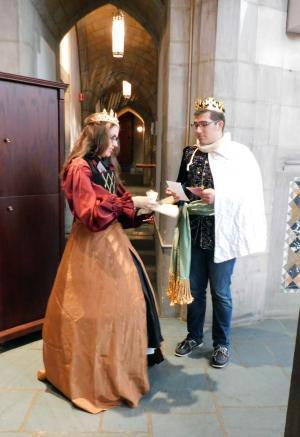 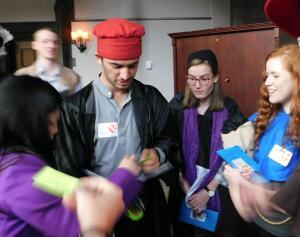 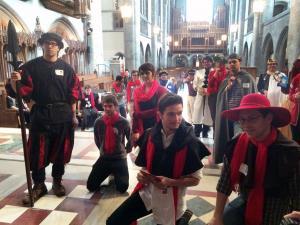 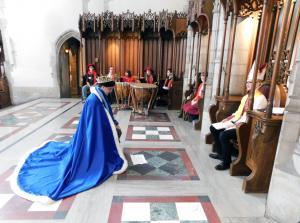