History of Science Assistant Professor and the College

Emily Kern is a historian of science, with a specialty in the intellectual and cultural history of anthropology, evolution, and the life sciences. Her research and teaching focus on the relationship between the production of scientific knowledge and the production of global political power in the nineteenth and twentieth centuries.

Her current book project, The Cradle of Humanity: Science and the Making of African Origins, explores how the African continent became the “cradle of humankind” and the pre-eminent site for human evolutionary research that it is today. Until the 1950s, it was generally believed that the human species first evolved in Asia, not Africa—an idea that was deeply rooted in European intellectual traditions and continued to draw historians and scientists to the archive, the laboratory, and the Asian field well into the twentieth century. The Cradle of Humanity argues that the story of humanity’s African origin is linked necessarily with the transformation of Africa itself as an object of historical and scientific inquiry. Foregrounding the changing geography of human origins in this history also makes clear that ideas about where humankind emerged often came before explanations for how evolution functioned, and that ideas about place, race, and world history shaped how scientists thought about biological mechanisms and the human species.

Kern is also co-editing the forthcoming volume New Earth Histories with Alison Bashford (UNSW) and Adam Bobbette (Glasgow). Situated at the intersection of the history of the earth
and environmental sciences, New Earth Histories explores the significance of multiple ideas of geological time and cosmological systems for the production of global modernity. She is also beginning work on a second project exploring the contemporary construction of the racial identity of Neanderthals against the long history of the disputed place of Neanderthals in the human evolutionary lineage since the discovery of the first Neanderthal remains in 1856 and the first complete skeletal analysis in 1908.

Kern earned her BA at the University of Pennsylvania and her PhD at Princeton University in 2018. Her dissertation won the 2019 DHST dissertation prize from the International Union of History and Philosophy of Science and Technology. Before coming to Chicago, she was a postdoctoral research fellow in the New Earth Histories Research Program at the University of New South Wales in Sydney, Australia. 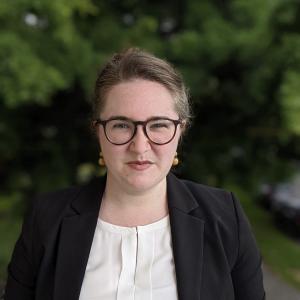