Arthur and Joann Rasmussen Professor in Western Civilization in the College; Professor of European Social History

Founding Director, Affiliated Faculty, and Member of the Board, Center for Gender and Sexuality Studies
Member, Greenberg Center for Jewish Studies

Nineteenth- and twentieth-century European social and cultural history with a focus on France and Germany; material culture, everyday life, and the built environment; Jewish history; gender history and theory; race in the Atlantic world; colonial and postcolonial Europe

The primary national focus of my research is modern France, but I have found myself intrigued by research problems best treated transnationally. My most recent book, Cultural Revolutions, moves across the Atlantic world from Britain, to colonial and early national America, and finally eastwards again to France. My ongoing pair of projects, Strangers at Home and Conundrums of Commemoration, stay on the European continent but involve a comparative analysis of Paris and Berlin in the twentieth century. Finally, although I have not yet published extensively in this area, I maintain an active interest in and regularly teach the history of European colonialism and the postcolonial world it left behind.

Conceptually, my work focuses on the intersection of material culture, everyday life, and politics. I seek to explain how and why everyday things have become catalysts for conflict, means of expressing identities and constructing selves, vehicles for dissenting opinions, and sites of unexpected state intervention. My research agenda is based on the hypothesis, informed by phenomenology and feminist theory, that key to answering these questions is the close and careful study of material culture, but a close and careful study that always links the concreteness of everyday goods to the abstractions of polity, society, and economy.

Although the courses I offer are necessarily broader and more general than this research agenda, they have been systematically informed by it. I use material and well as visual and textual sources in virtually all my classes, and nearly all are transnational in reach.

My publications in the domain of material culture and the histories of production and consumption include two books: Cultural Revolutions: Everyday Life and Politics in Britain, North America, and France (Oxford: Berg Press, 2008; Berkeley: University of California Press, 2009); French translation (Presses Universitaires de Mirail, 2009) and Taste and Power: Furnishing Modern France (Berkeley: University of California Press, 1996). I am also currently working on two book-length projects in this area: The Everyday of Modern Citizenship: France and Germany 1918–1940 and Conundrums of Commemoration.

My articles on material cultural and politics include "Perceptions of Beauty and the Problem of Consciousness," in Lenard Berlanstein, ed. Rethinking Labor History (Urbana: Univeristy of Illinois Press, 1993); "After the Revolution: Recycling Ancien Régime Style in the Nineteenth Century," in Bryant T. Ragan and Elizabeth Williams, eds. Recreating Authority in Revolutionary France (New Brunswick, NJ: Rutgers University Press, 1992), pp. 144–174; "The Gendering of Consumer Practices in Nineteenth-Century France," in Victoria de Grazia and Ellen Furlough, eds. Sex of Things: Essays on Gender and Consumption (Berkeley: University of California Press, 1996), pp. 79–112; “Regeneration through the Everyday? Furniture in Revolutionary Paris,” in a special issue of Art History 28, no. 1 (Spring 2005), ed. Katie Scott, and; “Beyond Words,” American Historical Review (October 2005); “Historians and Architectural History,” Journal of the Society of Architectural Historians (March 2006).

My most recent area of research is at the intersection of Jewish history and material culture. Some early thoughts on those questions may be found in "'Jewish Taste'? Jews, and the Aesthetics of Everyday Life in Paris and Berlin, 1933–1942," in Histories of Leisure, ed. Rudy Koshar, 299–318 (Oxford: Berg Press, 2002). That reflection has taken a somewhat different turns in "Resisting Context: The Spiritual Objects of Tobi Kahn," in Objects of the Spirit: Ritual and the Art of Tobi Kahn, ed. Emily Bilski, 71–78 (New York: Avoda/Hudson Hills, 2004);  "Coming Home? Jews in Postwar Paris," Journal of Contemporary History 40, no. 2 (2005): 237–59; and "The Boundaries of Jewishness or when is a Cultural Practice Jewish?" Jewish Social Studies (Spr. 2009). Finally, "Archiving a Life: Post-Shoah Paradoxes of Memory Legacies" for a volume edited by Alf Lüdtke and Sebastien Jobs, submitted September 2008, is my most recent venture in this area. 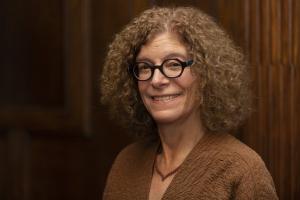