Associate Professor of US History and the College

Rashauna Johnson is a historian of the 19th-century African diaspora, with an emphasis on slavery and emancipation in the US South and Atlantic World. She is especially interested in the limits and possibilities of archival histories of enslaved and freed people and the worlds in which they labored and lived. Johnson teaches courses on race, slavery, and nation; methodologies of slavery studies; and the 19th-century US.

Johnson is the author of Slavery’s Metropolis: Unfree Labor in New Orleans during the Age of Revolutions (Cambridge UP, 2016; paperback 2018), which was awarded the 2016 Williams Prize for the best book in Louisiana history and the 2018 H. L. Mitchell Award by the Southern Historical Association for the best book on the southern working class. Slavery's Metropolis was also named a finalist for the 2016 Berkshire Conference of Women's Historians Book Prize, honorable mention for the Urban History Association's Kenneth Jackson Award, and a finalist for the 2017 Frederick Douglass Book Prize. She is currently at work on her second book project, a history of family and region, slavery and emancipation in rural Louisiana. That project has been supported by the Mellon Scholars Post-Doctoral Fellowship in African American History at the Library Company of Philadelphia and The Gilder Lehrman Institute of American History.

Johnson serves extensively within and beyond the profession. She has been a member of several book prize committees, including Wesley-Logan (AHA), David Montgomery (OAH), and Harriet Tubman (Schomburg), as well as program and fellowship committees. She is currently a board member of the Association for the Study of the Worldwide African Diaspora (ASWAD). Consistent with her commitment to engaged scholarship beyond the profession, Johnson regularly delivers lectures to public and private high schoolers, and she has taught GED and literature courses in correctional facilities.

Johnson grew up in New Orleans, Louisiana. She earned a BA in Afro-American Studies and political science from Howard University, where she graduated summa cum laude and Phi Beta Kappa. She earned a PhD in history from New York University. Her graduate studies were supported in part by the Andrew Mellon Predoctoral Fellowship in the Humanistic Studies, and her dissertation received NYU’s 2011 Dean's Outstanding Dissertation Award in the Humanities. She is also the recipient of the Drusilla Dunjee Houston Award given by the Association of Black Woman Historians. She taught in the history department at Dartmouth College for nine years, where she directed the foreign study program in London (2017) and the honors program (2019-20). She was also affiliated with the Program in African and African American Studies (AAAS), and served on the advisory board for the Mellon Mays Undergraduate Fellowship (MMUF) Program.

“From Saint-Domingue to Dumaine Street: A Family Story of Atlantic Circulations and Great Migrations,” Journal of African American History 102, no. 4 (Fall 2017): 427-43.

“Streets and Archives: Slavery and the Spaces of Early New Orleans,” Process History: The Blog of the Organization of American Historians (OAH), April 5, 2017.

“Slavery’s Metropolis: The Place of Enslaved People in a Revolutionary Age,” Age of Revolutions, ageofrevolutions.com, February 27, 2017.

—Marc Parry, “How Should We Memorialize Slavery? A Case Study of What Happens When Research Collides with Public Memory,” The Chronicle Review of The Chronicle of Education, September 15, 2017.
—“Raquettes in New Orleans,” Tripod: New Orleans at 300, WWNO Radio Interview, January 2016. 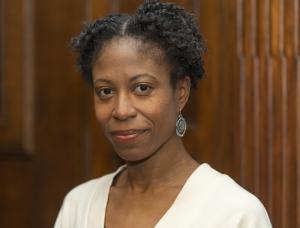